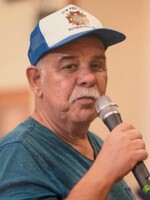 He was born in Camden NJ to Miguel and Lucy (nee Cancel) Ortiz. He proudly served in the United States Army completing his service in 1976. He served in Vietnam and received 5 medals, for Good Conduct, National Defense Service, Bronze Star, Vietnam Service and Vietnam Campaign. Afterward for 30 years, he was employed with NJ Transit in railroad construction, before he retired. He was a longtime member and very involved with the VFW #227, American Legion 453 and American Legion 109 in Rutherford. He loved his “scratch off’s” and was a frequent winner. He also donated to many charities.

Most important to Miguel was his family. He always had a smile on his face and loved to talk to anyone and everyone at all the family gatherings and around town. He was deeply committed to taking care of his brother-in-law Dante Ultimo. All of his family could depend on him, especially his wife, who he would wake up every morning for work and have breakfast with coffee prepared. He was a hard worker and a dedicated family man.

Miguel was preceded in death by his brothers Samuel, Freddie, Jimmy, and Tony and his sisters Gladys and Susana.
Miguel will be dearly missed by his mother Hilda Ortiz, devoted wife Anne, his children Joel Ortez and wife Khemmarin, his daughters Jacqueline Ortez and Melissa Ortez, his sisters Miriam, Lenore, Diane, Rosita, Ida, Carmen and Sylvia, and his brothers William, Jose and Juan.

Funeral Mass and Interment will be private.

All rights reserved. This obituary is also archived at obittree.com